Pamukkale, meaning “cotton castle” in Turkish, is a natural site in Denizli Province in southwestern Turkey. The city contains hot springs and travertines, terraces of carbonate minerals left by the flowing water. It is located in Turkey’s Inner Aegean region, in the River Menderes valley, which has a temperate climate for most of the year.

Tourism is and has been a major industry. People have bathed in its pools for thousands of years. As recently as the mid-20th century, hotels were built over the ruins of Hierapolis, causing considerable damage. An approach road was built from the valley over the terraces, and motor bikes were allowed to go up and down the slopes. When the area was declared a World Heritage Site, the hotels were demolished and the road removed and replaced with artificial pools. Wearing shoes in the water is prohibited to protect the deposits. 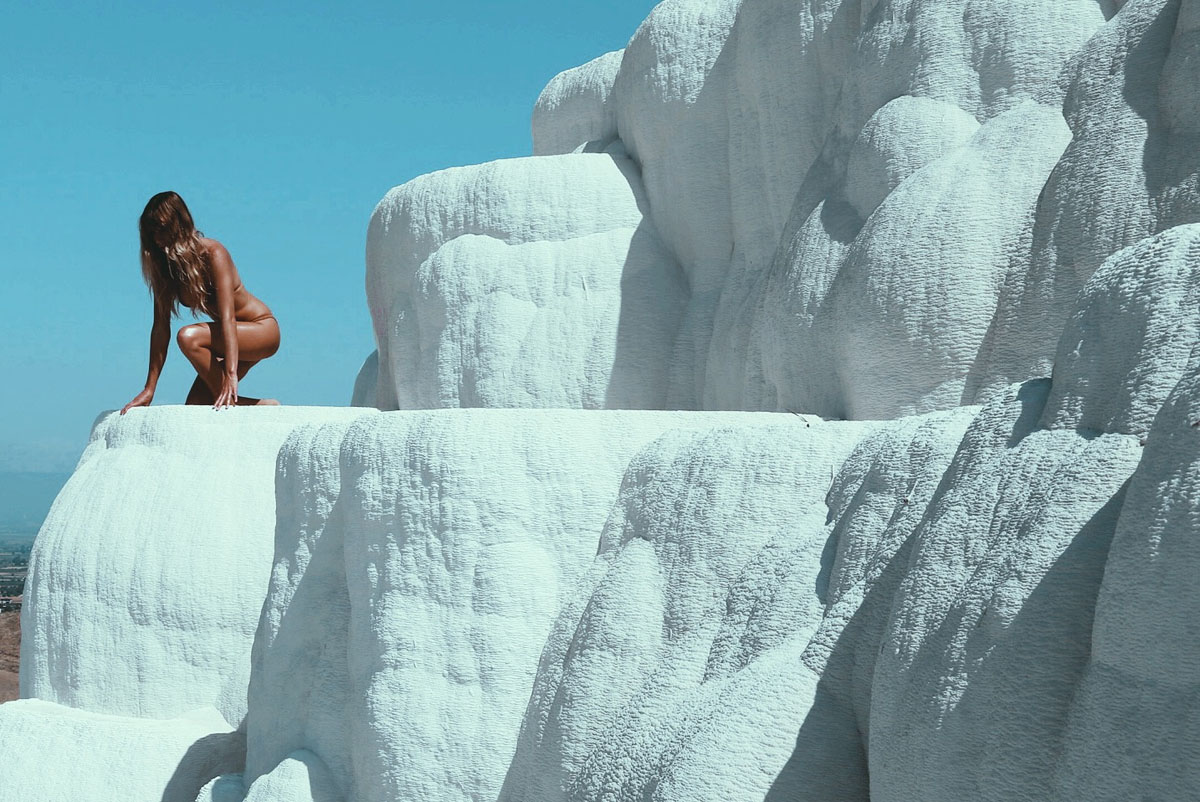 This reaction is affected by the weather conditions, ambient temperature, and the flow duration. Precipitation continues until the carbon dioxide in the thermal water reaches equilibrium with the carbon dioxide in the atmosphere. Measurements made at the source of the springs find atmospheric levels of 725 mg/l carbon dioxide, by the time this water flows across the travertines, this figure falls to 145 mg/l. Likewise calcium carbonate falls from 1200 mg/l to 400 mg/l and calcium 576.8 mg/l to 376.6 mg/l. From these results it is calculated that 499.9 mg of CaCO3 is deposited on the travertine for every liter of water. This means that for a flow rate of 1 l/s of water 43,191 grams (1,523.5 oz) are deposited daily. The average density of a travertine is 1.48 g/cm3 implying a deposit of 29.2 dm3. Given that the average flow of the water is 465.2 l/s this implies that it can whiten 13,584 square metres (146,220 sq ft) a day, but in practice this area coverage is difficult to attain. These theoretical calculations indicate that up to 4.9 square kilometres (1.9 sq mi) it can be covered with a white deposit of 1 millimetre (0.039 in) thickness.

The underground volcanic activity which causes the hot springs also forced carbon dioxide into a cave, which was called the Plutonium, which here means “place of the godPluto”. This cave was used for religious purposes by priests of Cybele, who found ways to appear immune to the suffocating gas.

Tadpoles can be found in the pools.[2]