Ephesus Greek: Ἔφεσος Ephesos; Turkish: Efes; ultimately from Hittite Apasa) was an ancient Greek city on the coast of Ionia, three kilometres southwest of present-day Selçuk in İzmir Province, Turkey. It was built in the 10th century BC on the site of the former Arzawan capital by Attic and Ionian Greek colonists. During the Classical Greek era it was one of the twelve cities of the Ionian League. The city flourished after it came under the control of the Roman Republic in 129 BC. According to estimates, Ephesus had a population of 33,600 to 56,000 people in the Roman period, making it the third largest city of Roman Asia Minor after Sardis and Alexandria Troas.

The city was famed for the Temple of Artemis (completed around 550 BC), one of the Seven Wonders of the Ancient World. In 268 AD, the Temple was destroyed or damaged in a raid by the Goths.It may have been rebuilt or repaired but this is uncertain, as its later history is not clear. Emperor Constantine the Great rebuilt much of the city and erected new public baths. Following the Edict of Thessalonica from Emperor Theodosius I, what remained of the temple was destroyed in 401 AD by a mob led by St. John Chrysostom. The town was partially destroyed by an earthquake in 614 AD. The city’s importance as a commercial center declined as the harbor was slowly silted up by the Küçükmenderes River. 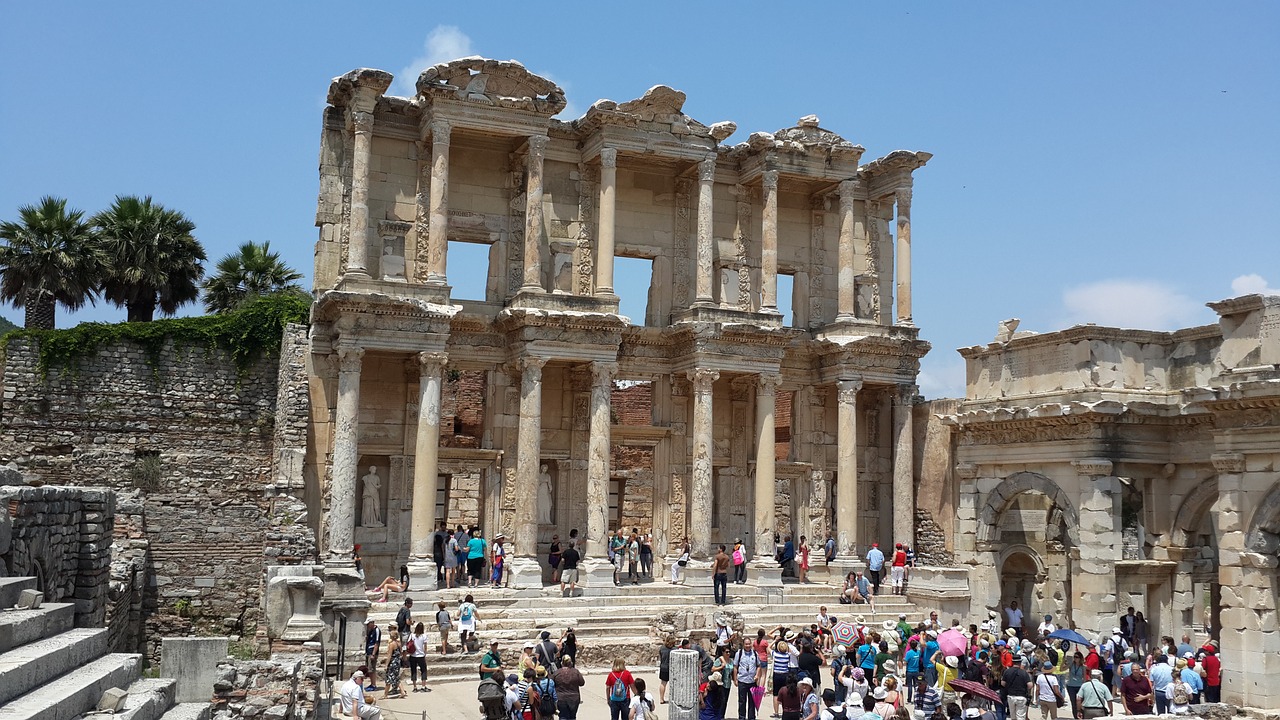 Ephesus was one of the seven churches of Asia that are cited in the Book of Revelation. The Gospel of John may have been written here. The city was the site of several 5th century Christian Councils (see Council of Ephesus). It is also the site of a large gladiators’ graveyard. The ruins of Ephesus are a favourite international and local tourist attraction, partly owing to their easy access from Adnan Menderes Airport.

Ephesus contains the largest collection of Roman ruins in the eastern Mediterranean. Only an estimated 15% has been excavated. The ruins that are visible give some idea of the city’s original splendour, and the names associated with the ruins are evocative of its former life. The theatre dominates the view down Harbour Street, which leads to the silted-up harbour.

The Library of Celsus, the façade of which has been carefully reconstructed from all original pieces, was originally built c. 125 AD in memory of Tiberius Julius Celsus Polemaeanus, an Ancient Greek who served as governor of Roman Asia (105–107) in theRoman Empire. Celsus paid for the construction of the library with his own personal wealth and is buried in a sarcophagus beneath it. The library was mostly built by his son Gaius Julius Aquila[50] and once held nearly 12,000 scrolls. Designed with an exaggerated entrance — so as to enhance its perceived size, speculate many historians — the building faces east so that the reading rooms could make best use of the morning light.

A part of the site, Basilica of St. John, was built in the 6th century AD, under emperor Justinian I, over the supposed site of the apostle’s tomb. It is now surrounded by Selçuk.

The Temple of Artemis, one of the Seven Wonders of the Ancient World, once stood 418′ by 239′ with over 100 marble pillars each 56′ high. The temple earned the city the title “Servant of the Goddess”. Pliny tells us that the magnificent structure took 120 years to build but is now represented only by one inconspicuous column, revealed during an archaeological excavation by the British Museum in the 1870s. Some fragments of the frieze (which are insufficient to suggest the form of the original) and other small finds were removed – some to London and some to the Archaeological Museum, Istanbul. 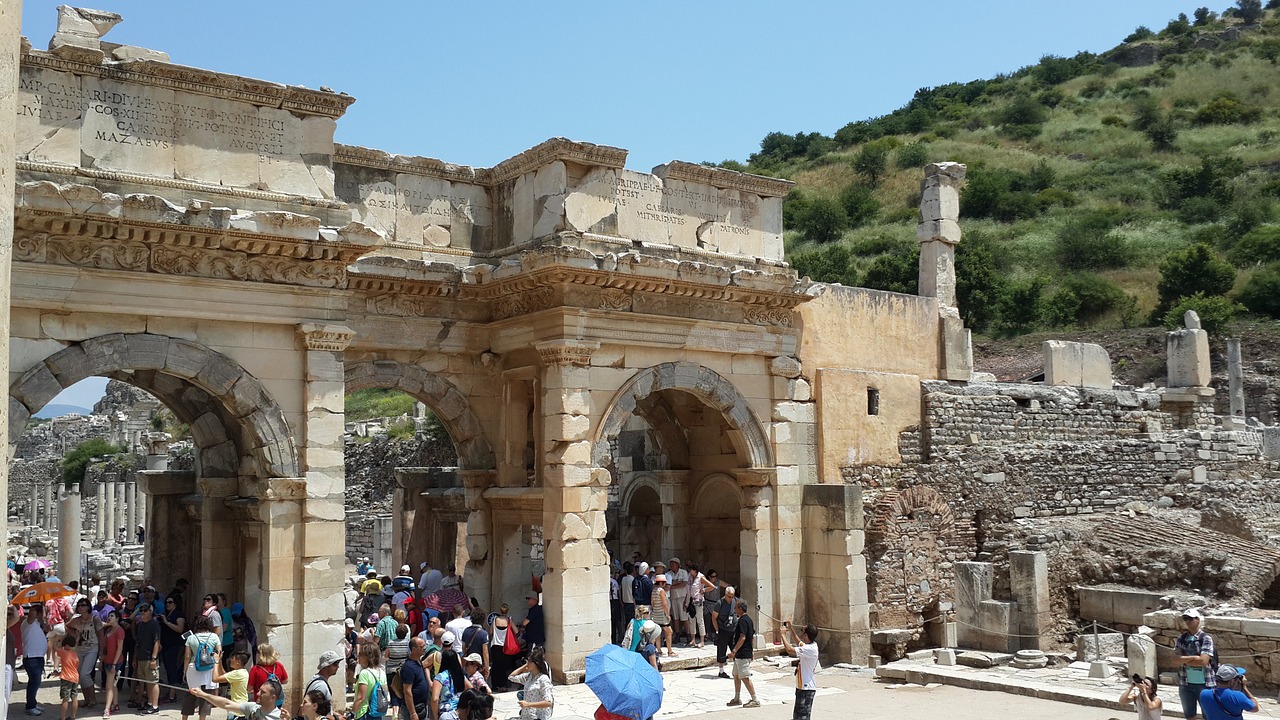 The Odeon was a small roofed theater constructed by Vedius Antonius and his wife around 150 AD. It was a small salon for plays and concerts, seating about 1,500 people. There were 22 stairs in the theatre. The upper part of the theatre was decorated with red granite pillars in the Corinthian style. The entrances were at both sides of the stage and reached by a few steps.

The Temple of Hadrian dates from the 2nd century but underwent repairs in the 4th century and has been reerected from the surviving architectural fragments. The reliefs in the upper sections are casts, the originals now being exhibited in the Ephesus Archaeological Museum. A number of figures are depicted in the reliefs, including the emperorTheodosius I with his wife and eldest son. The temple was depicted on the reverse of the Turkish 30 million lira banknote of 2001–2005 and of the 20 new lira banknote of 2005–2009.

The Temple of the Sebastoi (sometimes called the Temple of Domitian), dedicated to the Flavian dynasty, was one of the largest temples in the city. It was erected on apseudodipteral plan with 8 × 13 columns. The temple and its statue are some of the few remains connected with Domitian.

At an estimated 24,000 seating capacity, the ‘Theatre’ is believed to be the largest outdoor theatre in the ancient world.

The Tomb/Fountain of Pollio was erected in 97 AD in honour of C. Sextilius Pollio, who constructed the Marnas aqueduct, by Offilius Proculus. It has a concave façade.

There were two agoras, one for commercial and one for state business.

Ephesus Pamukkale Marmaris By Boat to Fethiye By Plane