PS = If your e-mail is not answered during the day, please contact us on Whatsapp.
Contact : Mr Hakan HACIBEKIROGLU Whatsapp : +905337385862

PS: We have moved to our new place in Sultanahmet Area it is called ISMAIL DEDE EFENDI HOUSE

Every = Wednesday, Friday, Saturday, and Sunday

The origin of Sufism lies in the life and practices of the Prophet of Islam and the Quran. Sufism embraces a well-founded and thorough interpretation of Islam which focuses on love, tolerance, worship of God community development through self-discipline, and responsibility. A Sufi way of life is to love and be of service to people

Known to the west as Whirling Dervishes, the Mevlevi Order was founded by Mevlana Rumi in the 13th century. The Order wrote of tolerance, forgiveness, and enlightenment. They survive today as a cultural brotherhood. They are not theatrical spectacles but sacred rituals.
The ritual of the Mevlevi sect, known as the sema, is a serious religious ritual performed by Muslim priests in a prayer trance to Allah.

Friday marks 173 years since the passing of legendary composer Ismail Dede Efendi, known by many as the father of Ottoman classical music.

“Dede Efendi is the pioneer of the Ottoman classical music,” Yalcin Cetinkaya, a musicologist at the Turkish Music Conservatory of Istanbul Technical University, told Anadolu Agency.

“He is a musician created by a very strong historical past,” he said. “Ottoman classical music filtered, developed, and passed down to Dede Efendi with a great accumulation from Itri,” said Cetinkaya, using the short name of the prolific Ottoman musician Buhurizade Mustafa, who died in 1711.

“Dede Efendi renewed this heritage that was passed down to him and transformed it into a sense of time,” added Cetinkaya, saying that this is one of Dede Efendi’s most important differences from other musicians. 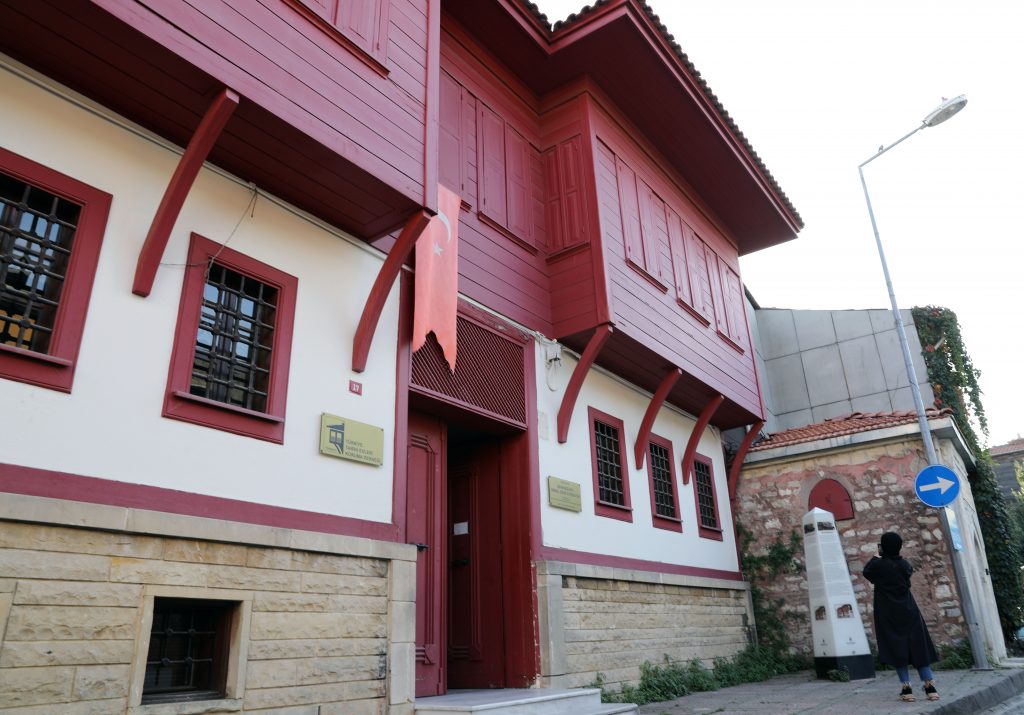 Ismail Dede Efendi, a well-known Turkish composer, lived in this house for 28 years. The house was leveled to the ground in the course of time until 1984. It was then restored by the Association for the Protection of Historical Houses of Turkey, depicting Turkish architecture of its period.

Born in 1778 in Istanbul, Dede Efendi attended the Yenikapi Mevlevi Lodge in 1798 because of his interest in Mevlevi culture.

Mevlevis, also known in English as Sufis, follow a school of thought in Islam inspired by Muslim poet and scholar Mevlana Jelaluddin al-Rumi, who focused on tolerance and love with his book The Masnavi.

“There is a very important practice in Mevlevi culture. Each dervish candidate is assessed by a chief dervish” to discover their tendencies, talents, and abilities, said Cetinkaya.

“Dede Efendi, with his special talent in music, received the special attention of Ali Nutki Dede,” a prominent poet and musician, he added.

He composed his first piece in the lodge and attracted great attention from Istanbulites of the time.

“People came to Ali Nutki Dede and wanted to see Dede Efendi, wanted to hear him and meet him,” he added.

One of those who heard about Dede Efendi’s talent was Ottoman Sultan Selim III, also a musician himself, who summoned Dede Efendi to Istanbul’s legendary Topkapi Palace. 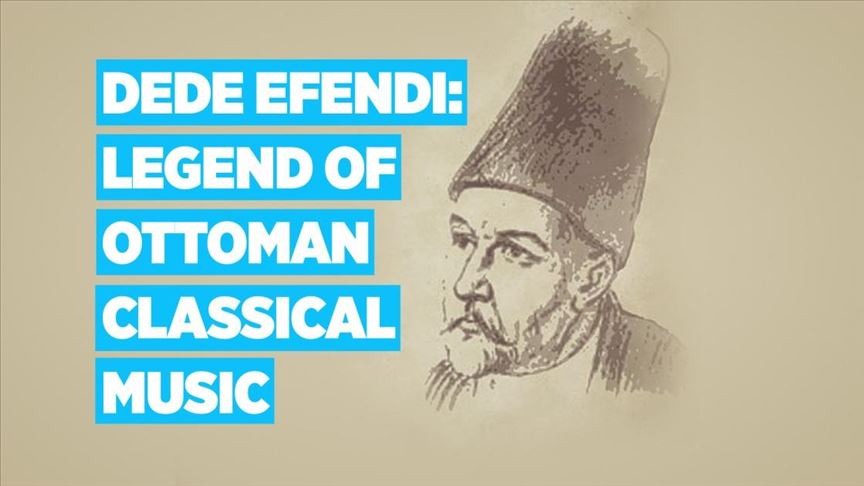 According to Talip Mert, a calligrapher formerly of Istanbul’s Marmara University, since the 15th century, Ottoman sultans had diaries called ruznames.

“In Sultan Selim III’s ruznames, the sultan himself visited the Yenikapi Mevlevi Lodge twice, although there was no specific mention of Dede Efendi,” he told Anadolu Agency, speaking at Ismail Dede Edendi’s house in Istanbul’s historic Sultanahmet district.

Although some accounts say Dede Efendi lived in the house for 28 years, Mert said the musician used it for around seven years until his death on Nov. 29, 1846, in Medina, modern Saudi Arabia, where he was doing the Hajj (pilgrimage).

Years later, while researching Ottoman archives on Dede Efendi, Mert found documents showing that the artist was plagued by debt and his house was confiscated after he died.

The house, which was presented to Dede Efendi by Sultan Abdulmecid I, was rebuilt after being destroyed by a storm. It is now open for visitors four days a week and offers a glimpse at Dede Efendi’s daily life.

“Historical information about him may not give us any idea about his artistic quality, but when we examine the Mevlevi rituals Dede Efendi composed, we can see his quality and abilities,” said Cetinkaya.

“In Mevlevi rituals, the words came directly from Mevlana Jalaluddin Rumi. Setting Rumi’s poems to music isn’t easy, and few musicians are successful at it,” he added.

“But Dede Efendi did justice to Rumi and his poems. This is a talent that can’t be seen in many musicians and composers.”

According to Cetinkaya, Dede Efendi never used music notes, but his music was immortalized for the ages because his students learned them by heart and passed them down to future generations.

Yet although Dede Efendi is said to have composed perhaps 1,000 songs — making him the most prolific Ottoman-era composer — only about 250 survive to this day, said Cetinkaya.

Dede Efendi’s relations with the Ottoman sultans also played a large role in his career.

“His first connection with the Ottoman sultans starts with Selim III, but Dede Efendi’s prime was during the reign of Mahmud II. Mahmud II valued all artists and culture dearly,” said Mert.

“Mahmud II also protected Dede Efendi and even took him to places he visited,” he added.

In 1802, Dede Efendi married a lady from the palace and achieved the rank of Musahib-i Sehriyari, meaning the sultan’s companion, under Mahmud II, said Mert.

His interaction with sultans continued after Mahmud II. Abdulmecid I also protected Ismail Dede Efendi, whom he loved and respected.

Dede Efendi lived and composed in the 19th century, when the Ottoman Empire was going through a Westernization period.

This also affected music, according to Cetinkaya.

The first Ottoman imperial orchestra was formed during the reign of Mahmud II, and Italian musician Giuseppe Donizetti was appointed maestro.

According to Cetinkaya, this move may have offended some composers.

“In a period when the Ottoman Empire became passive towards the West, after the passing of Selim III, Dede Efendi and his students tried to preserve what is local and traditional in music,” said Cetinkaya.

Although he tried to preserve traditional music, Efendi was influenced by Western musicians who visited Istanbul, the Ottoman capital.

“For example, his composition Gulnihal shows how he caught the rhythm of the age. Because at that time, waltzes were very popular in Europe,” said Cetinkaya.

Yine Bir Gulnihal is a well-known song in Turkey, especially after famed Turkish singer Zeki Muren performed the song in the 20th century.

“This man had never been to Europe in his life. But he listened to composers from Europe,” Cetinkaya said. “This is a great success.”

“This helps us understand how great Dede Efendi was,” he added.

Every = Wednesday, Friday,Saturday, and Sunday

How to Entrance of Sirkeci Train Station in Sirkeci Istanbul

Mevlevi believed that during the sema the soul was released from earthly ties, and able to freely and jubilantly commune with the divine. Dervish literally means “doorway” and is thought to be an entrance from this material world to the spiritual, heavenly world.
The Whirling Dervishes played an important part in the evolution of Ottoman high culture.
From the fourteenth to the twentieth century, their impact on classical poetry, calligraphy and visual arts was profound. Rumi and his followers integrated music into their rituals as an article of faith. Rumi emphasized that music uplifts our spirit to realms above and we hear the tunes of the Gates of Paradise.

Every = Wednesday, Friday,Saturday, and Sunday